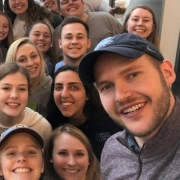 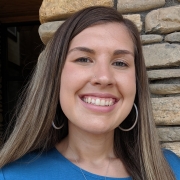 Like many recent college graduates, Hannah Smith has her sights set on the future. She will begin attending Duke Divinity School in the fall and admits that she is nervous to be starting this new chapter in her life. You see, this soft-spoken young woman grew up in the church as a “PK” (preacher’s kid), but it wasn’t until she began attending Wesley Campus Ministry at UNC Chapel Hill that she truly owned her faith and began her formative faith journey with a community of peers and mentors.

One evening during inspiring worship at Wesley, Hannah felt God’s call on her life loud and clear. In that experience, she gave her entire future to God and prayed for ways to serve. For the next four years, she was nurtured and encouraged in her calling by her campus ministry family. She was encouraged to take leadership roles, and she had access to mentors like her campus minister and Duke Divinity School interns who have helped her through the many spiritual, emotional, and administrative hurdles. Through this formative process, Hannah ultimately made the commitment to enter into training for full-time ministry.

It’s not an accident that Hannah has come to claim her calling during her time on campus. God’s spirit has been working in her life since before birth, and the prayerfully designed experiences in Hannah’s campus ministry have given her a place to claim, grow, and share her faith with others.

This is exactly the environment that The Foundation for Evangelism’s Grants Impacting Young People are intended to nurture. Begun in 2017, the Making Disciples on the College Campus Grant (which Wesley Campus Ministry at UNC Chapel Hill was a recipient of) has born fruit and we have seen positive returns from this partnership. According to campus minister, Rev. Ryan Spurrier:

These grants allow The Foundation to be a Catalyst to equip young disciples on college and university campuses to share the Good News of Jesus Christ. Wouldn’t it be amazing if the more than 1,300 Methodist/Wesleyan collegiate ministries on campuses around the globe could create such a welcoming, nurturing, and challenging environment for students?

If you would like to support ministries impacting young people, consider giving a donation today to help support grants for campus ministries that transform students into disciples who can’t help but serve as Jesus served and share WHY JESUS in every aspect of their lives!

At the recent annual meeting of The Foundation for Evangelism board of trustees, grant recipients shared about their ministries and expressed their thanks for the funding that helps them to be catalysts to equip disciples to share the Good News of Jesus Christ.

Dr. Daniel Shin shared that as an E. Stanley Jones Professor of Evangelism at Drew University in New Jersey he has been able to partner with other organizations  to further the vision and work of The Foundation for Evangelism, working cross culturally and ecumenically around the globe. He also shared that through his interactions on campus and beyond, he has come to realize that:

“People are searching for effective models of evangelism that are theologically informed, ethically responsible, and transformative for both persons and communities.”

Making Disciples on the College Campus

Rev. Ryan Spurrier, director of campus ministry at UNC Chapel Hill spoke to the group of trustees and staff and shared how a grant from The Foundation had birthed new ministries and sparked excitement among the students there. He shared comments from several students who said:

I found out about Wesley through other people, and Wesley had given me so many great memories my first year (Retreats, Thursday Night Dinners, etc.) that i wanted to be responsible for bring other people to those experiences.

Evangelism and Outreach is central to Jesus’ life and teachings…. We are called to outreach to people not just to share the good news of Jesus with them, but also to bring them into the great Christian community and family that we have and value so much.

Evangelism and Outreach is important to the Church as it is a way for us to act out Christ’s love to others. Sometimes this is hard to find on a college campus and words may not have that much of an impact, but physically being there and doing things to make change makes it easier for more people to see God’s presence. Again, I felt this the most during Chalk the Quad* week during Thanksgiving. I was just starting to get involved with Wesley and seeing how many people the event touched who were not in the ministry was inspiring to me.

And finally, one student responded to the question “Is there a moment that you decided Evangelism Outreach is important?” by saying:

A friend and I reached out to [another student]** at a University UMC service and invited him to Wesley and he became a dedicated attendee of Men’s Small Group and Worship until he graduated.- Delaney Davis

*Chalk the Quad is an event in which a large a-frame chalk board is placed in the heart of campus and students are asked to respond to a Spiritual prompt.

** The student was baptized by University UMC during that academic year.

Professor Haertner shared, “We taught an Evangelism class together this morning [May 7, 2015] on the topic ‘Mission (im)possible? Evangelism in an atheistic / areligious context’. In comparing the challenges in Eastern (former GDR) Germany and the situation in Southern California we observed similarities as well as differences. We had inspiring and fruitful conversations with our student group, including a reflection on the controversy between Karl Barth and Emil Brunner concerning ‘Anknüpfung und Widerspruch’(Tying and Contradiction). A recent video clip about evangelizing initiatives in the U.K. within the ecumenical Fresh-X-movement, which we shared in class, encouragingly illustrated: ‘mission possible!’

This kind of visit and exchange is a true treasure both for us as colleagues and for the students!”